The New Jim Crow takes the form of mass incarceration.

You might think, “No, that can’t be!” But, how are we to know? When one thinks of slavery they think of the millions of African slaves that were beaten, dehumanized and tortured for 245 years in America. Slaves were considered property, had no rights and the women were often abused, raped, and exploited. How does prison compare? There are over 2 million incarcerated in the United States today and African Americans nearly constitute 1 million of that population. In the prison system you are nothing, you don’t have a name, you are an inmate. You are often forced to do things against your will. You are told when to eat and what you can eat, when you can go outside, when you can shower, you have no free will. Sounds like slavery to me. How did we get here? It began with Richard Nixon’s “War on Drugs” and this legacy continues on 40 years later with the cost of freedom for African American Males. 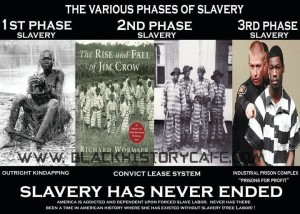 Since the launch of Nixon’s campaign public opinion has been shaped by news stories from popular media that depict certain minority groups as being associated with the use, transportation, and sale of illicit drugs, thus being responsible for the Nation’s drug problem. Print, television news media, negatively portray African Americans as being drug dealers and offenders reinforcing the exclusionary attitudes and practices targeted towards the group and contribute to the development of stringent policies that ultimately affect the group.

This system was designed to limit the freedom and opportunities of African Americans putting them back where they began, in a subordinate racial caste. In the words of Civil Rights advocate and writer, Michelle Alexander, “Since the nation’s founding, African Americans repeatedly have been controlled through systems of institutions such as slavery and Jim Crow, which appear to die, but then are reborn in a new form tailored to the needs and constraints of the time”. The “war on drugs,” the campaign started by Richard Nixon on June 18th, 1971, has become the newest tool used to disrupt communities and generate today’s slaves, prisoners.

More than 300 years ago, many African males and women were shipped from their native home land and brought to European colonies as slaves. While slavery was “abolished” in 1865 by Lincoln’s Emancipation Proclamation that freedom provided an illusion. Constitutional amendments guaranteeing African Americans “equal protection of the laws” proved obsolete once a white backlash sparked during the Reconstruction era. African Americans once again found themselves powerless, as the Jim Crow system of segregation emerged.

According to political economist John Flateau, “Metaphorically, the criminal justice pipeline is like a slave ship, transporting human cargo along interstate triangular trade routes from Black and Brown communities; through the middle passage of police precincts, holding pens, detention centers and courtrooms; to downstate jails or upstate prisons; back to communities as rehabilitated escapees; and back to prison or jail in a vicious recidivist cycle”.

Beginning in the 1960’s the crime rate in the United States rose for a period of 10 years. Reasons for this spark in crime rates can be explained by the “baby boomer” generation, which is responsible for the spike in the number of young men in the fifteen-to-twenty-four age group. The media failed to mention the economic and demographic factors contributing to the crime rate. The surge of young men in the population was occurring at the same time that the unemployment rate for black men was rising significantly. Barry Goldwater laid the foundation for the “get tough on crime” movement in his 1964 presidential campaign. He expressed his fear of riots and black crime, ultimately dismissing Civil Rights activists concerns of the uprisings being directly related to the widespread police harassment and abuse. This in turn caused many black advocates to join the calls for “law and order” and expressed support for the same law makers who attempted and succeeded at depicting African Americans as disobedient criminals.

The Rockefeller drugs laws were enacted in 1973 when then Governor of New York Nelson Rockefeller decided to get tough on drugs. Under these laws, the penalty for selling two ounces (57 g) or more of heroine, morphine, raw or unprepared opium, cocaine, or cannabis or procession four ounces (113g) or more of the same substance, was a minimum of 15 years to life in prison and a maximum of 25 years to life.

Disproportionate arrest feeds the mistaken assumption that African American use drugs at higher rates than whites and this continues to serve as justification for racial profiling. Contrary to belief, “the typical cocaine user is white, male, a high school graduate employed full time and living in a small metropolitan area or suburb”. According to the government’s count, more than 24 million Americans, mostly whites, have used marijuana, cocaine, or some other illicit drug. Rising drug and crime rates in areas such as Harlem, led black activists to call for what would become known as the Rockefeller laws.

Both former presidents Ronald Reagan and Bill Clinton played a vital role in the rise of mass incarceration. Prior to Reagan’s Anti-Abuse Act, was the introduction of crack to New York City. According to retired DEA special Agent, Robert Stutman, “With cocaine, the high usually onsets in three to six minutes, depending on the person. Crack’s high onsets in about ten to twenty seconds. It is also a far more intense high”. He also states that the crack organization was street based and New York drug peddlers mass merchandized cocaine.

Four years later, in 1986 Ronald Reagan signed The Anti-Drug Abuse Act, which created the mandatory minimum penalties for drug offenses. Sentencing for drugs were as followed, possession of at least one kilogram (1000g) of heroin or five kilograms (5000g) of cocaine became punishable by at least ten years in prison. The sale of five grams (.005kg) of crack led to a mandatory five year sentence as a response to the crack epidemic. These laws aggravated racial disparities in the prison population based off the fact that the drug offenders sentenced under the crack cocaine provisions were African American. The portion of African Americans in state prisons grew from 7 to 25% within the first 5 years of the 1986 act.

The Sentencing Project first alerted the public of the growing incarceration rate and disparities in 1990. It revealed that almost one in four black men between the ages of twenty to twenty-nine belonged to the criminal justice system, either in prison, probation, or parole. Although whites have a higher rate of illegal drug use, 60% of drug offenders sent to prison for drug charges in 1988 were African American. In the 1990’s drug offenses accounted for 27% of the increase in the number of blacks in state prisons, compared to a 14% increase for whites.

In 1994, Bill Clinton he signed the Violent Crime Control and Law Enforcement Act, which offered states billions in funding for new prisons if they reduced prisoners’ eligibility for parole. The law also established mandatory life sentences for those convicted of a third violent felony. According to Brennan Center for Justice, “By the end of Clinton’s presidency, the number of people in America’s prisons rose by nearly 60%”.

By 1995, The Sentencing Project reported that the rate for black men between the ages of twenty to twenty nine belonging to the criminal justice system had risen to one in three. While female incarceration rate remain lower than men, the fastest growing segment of the prison population is African American women.

Poor black men and women tend to live in economically segregated neighborhoods where the exit and reentry of inmates is geographically concentrated. As many as 1 in 8 of the male adults of these urban areas are sent to prison each year, while 1 in 3 can be sent to prison any given day.

Incarceration rates remained high or intensified by 1996 in neighborhoods around New York City that had the highest rates in 1990. Analysis from Professor of Law at Columbia Law School, Jeffrey Fagan, Associate Professor at John Jay College of Criminal Justice, Valerie West, and staff associate at Columbia University, Jan Holland concludes that incarceration is concentrated in New York City’s poorest neighborhoods and because of this they receive more intensive and punitive police enforcement as well as parole surveillance. 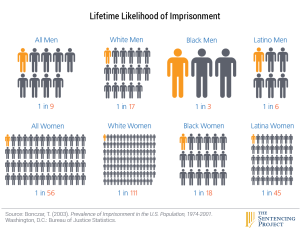 From 1980 to 2008, the number of people incarcerated in U.S prisons rose from 500,000 to roughly 2.3 million. Today the US holds 5% of the world’s population and 25% of world prisoners. African Americans constitute nearly 1 million of the total 2.3 million people incarcerated. Blacks are about eight times more likely to spend time behind bars than whites. Nationwide African Americans represent 26% of juvenile arrest, 44% of youth who are detained, 46% of the youth who are judicially waived to criminal court, and 58% of the youth admitted to state prison.

While President Obama attempted to reverse drug laws that were put in place by former President this is not enough for the black communities. Many in the low income areas result to drugs, crime and violence because that is all that they have. Most drug dealers come from low income areas and often do not possess the simple skills or education to carry out a city or government job. Drug offenders are labeled as felons upon release from prison, which limits their ability to get a job and possibly change their lives. What is left for them to do? They often repeat this cycle of selling drugs because it is their only way to survive. The cycle will continue as citizens of low income areas struggle to find means to survive with low wages and the lack of education.

3 thoughts on “Prison: The newest form of chattel slavery”